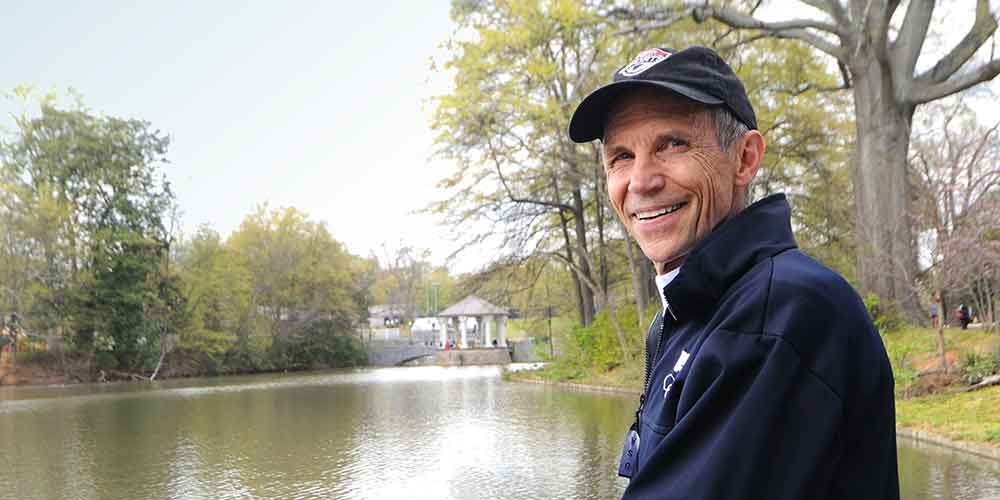 Over a million runners and walkers have read Galloway books, attended his retreats / running schools, received E-coaching or individual consultation or joined his training programs. His doable plans have opened up the life-changing experience of finishing a distance event to almost everyone. His methods have reduced aches, pains and injuries to almost zero. Jeff is in front of an audience motivating and teaching over 200 times a year–helping those of all abilities to enjoy exercise until they are 100!

Inspirational and informative clinics per year

Training programs around the world

Olympian Jeff Galloway competed against the world’s best athletes in Europe, Africa and the former Soviet Union. He broke the US 10-mile record (47:49) in 1973 and has a six-mile best of 27:21. Among his victories are the Peachtree Road Race, Honolulu Marathon, Atlanta Marathon and top place finisher in many of the prominent US races such as 5th as a member of the US National team in 1973, and competed for the USA in the ‘75 International Cross Country Championships in Rabat Morocco.

Atlanta Committee for the Olympic Games. As a member of the Medical and Health Committee, Galloway designed a heritage program for the schools, which brings Olympic excitement into daily fitness, learning fun.

Jeff has conducted/directed over 300 fitness events, including the annual Kaiser Permanente Corporate Run/ Walk in Atlanta.

This was designed to promote the cause of a Women’s Olympic Marathon, which reached a successful conclusion in the 1984 Olympics.

Consultant to dozens of races of all sizes including the MARATHON TO FINISH BREAST CANCER, Crescent City Classic, Chicago Marathon, Vancouver International Marathon and Portland Marathon.

Fitness and Lifestyle Health Promotion: For over 15 years, Jeff has conducted a wide range of teambuilding health promotions for corporations.

Fitness Retreats: Since 1975 he has conducted lifestyle fitness vacations in places such as Lake Tahoe, Florida, Carmel CA, Vail CO and Greece. He owns a permanent retreat facility in Blue Mountain Beach, FL.

Monthly Columnist for Runner’s World Magazine. Jeff’s popular training column addresses the needs of the runners of the second running boom. Click here to view past Runner’s World articles that Jeff has written.

Galloway Training Program Groups. Currently, there are Galloway training programs in 90+ locations. This lowmileage program consists of two 30-45 minute runs per week and a longer run/walk on the weekend using the Run Walk Run method. The marathon is now possible for almost everyone. Jeff gives standing-room-only clinics at many marathons in North America. A high percentage of the two million people who start to train for a marathon get their training program and their motivation from Jeff and his writings.

Over 200 talks a year! Galloway is on the road over 70% of the time conducting seminars, motivating groups, and helping others improve their lives through exercise. His training groups include GETTING STARTED, MARATHON, HALF MARATHON, 5K/10K and include walkers in many of the cities. Several clinics each year are translated into other languages.

Books. Jeff has written over 20 books which have sold over one million copies.  His first book, Galloway’s Book on Running 2nd (originally published in 1984) has been the best-selling training book in North America for over 25 years. His books have been translated into over 20 languages. There is a Galloway book for just about every running and walking interest!

Jeff initiated the Atlanta Corporate Challenge, now the Kaiser Permanente Corporate Run/Walk, in 1983 with 900 participants. Through his staff, he has developed this event into one of the largest corporate fitness event in the U.S. with registration topping 20,000 participants.

Fundraising for the AIDS Foundation, Joints In Motion (Arthritis Foundation,) Breast Cancer Research, etc. – The Galloway programs promote fundraising for a broad base of community and national charities. BREAST CANCER MARATHON. Jeff serves as Training director and co-founder for this exciting event in which 100% of the race proceeds go to breast cancer research and care for underserved breast cancer patients: over 10,000 participants and over $1,000,000 raised each year.