In my Phidippides store in Ansley Mall you’ll see the first place trophy that I won in the 1st Peachtree Road Race in 1970.  It was very unusual to have such a big trophy in a 10K road race and many ask me who was the sponsor.  Here is the story.

My friend Tim Singleton was the main race director for the new Atlanta Track Club and was starting an ambitious race from Buckhead to 5 Points.  He approached several possible sponsors to pay for trophies with no result.  I dropped by his office at Georgia State before a class one day and he was excited.  The first brewery in Atlanta, Carling Brewery, wanted to have a “Family Field Day” at their facility.  In exchange for providing volunteers to conduct this event, Carling would pay for the Peachtree Road Race Trophies.

I helped Tim conduct these fun games and as we were cleaning up the field afterward asked if he needed help on July 4th.  “I have it all in the back of my car”, he replied.  When I asked about registering, he said—“just show up on race morning”.  Knowing it would be hot in Atlanta on July 4th, I asked why he set the start time at 10am.  He wanted runners from Southern cities to wake up early and drive to the race.

So on July 4th, 1970 I arrived about just before 8:30 am at the large parking lot of the Sears Buckhead store (intersection of Peachtree and West Paces Ferry) to register.  Tim was getting the materials out of his car, and I helped him set  up under and overhang on the front of the Sears building.  Tim’s wife, Shelby, took over as Tim went to the start line,  and I signed my name to be officially registered.  One after another runner drove into the parking lot and registered and about 9:50 Tim called us to the start.

I knew at least half of the runners and believed that I could win.  There were only 110.  It was good to see runners I had raced during high school, and friends from other cities around the South.  One the athletes I had coached at Georgia Tech, Joel Majors, was running and we talked strategy.  I was hoping to run with him—and pull him along.

It was beginning to heat up and the humidity was high, as is the norm on the nation’s birthday in Atlanta.  I remember that I was sweating during my accelerations at the end of my warmup.

The starting gun fired and we were off on a fairly flat stretch of Peachtree Street for about half a mile.  Joel and I were in a small pack of competitors, running pretty easily.   At that point, the road dropped into a gentle downgrade for about a mile down to Peachtree Creek.  I loved downhill running  Joel tried to stay with me but I was feeling too good and just drifted away from him.

The original course was tougher than today because it included several additional uphill segments, including a long hill in the last mile—past 200 Peachtree—site of the Davidson’s Department Store.  The last 200 yards were slightly downhill.  There were no water stations, sprinklers, and I heard no mile times being called.  There were only a few spectators were at the finish—maybe a total of 20.

I was all alone and didn’t struggle until that  last hill.  Temperature was high 80’s with no breeze downtown and no shade, so it was hot. I coasted to the finish past Tim’s son who was sitting on a lawn chair in the middle of the street.  All I could think about was how to cool off—and I found it.  Just past the finish was a fountain  at the Equitable building.  I went right in for  great soak. 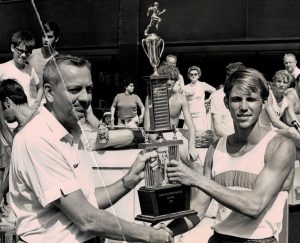 Within 30 minutes all of the runners had finished and Tim called us together for the awards ceremony.  I grabbed my trophy and ran back to my car at the start.  We Galloways celebrated later with a watermelon seed spitting contest in the courtyard of the Galloway School.  It was a great day!